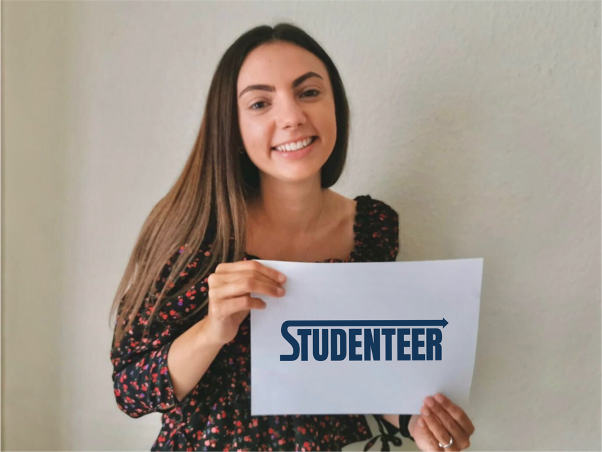 Could you tell us a little bit about how and why you went about setting up Studenteer?

When the rumours of lockdown became a reality and COVID-19 halted my post-university plans, I was unsettled by fears of unemployment. After a few weeks of endlessly scrolling job sites, my fears were seemingly confirmed. Like everyone, I’d worked so hard over the past 4 years including a 12-month undergraduate placement, but my dream graduate job was no-where to be found. On top of this was a feeling of helplessness. I felt so grateful for the country’s key workers and wondered if I could positively impact society differently.

I thought, perhaps, I could use my business skills to help others. So, I investigated and started networking with people. First, my university careers advisor who introduced me to the owner of a graduate recruitment agency, Graft Talent. They’d both highlighted the current lack of work experience opportunities for students and directed me to the co-founder of an initiative called Furlonteer.

We thought we should replicate the Furlonteer model, instead connecting students to charities. So, I was challenged to make this a reality.

Fulfilling our mission of helping students from the onset, we recruited a team of hard-working and proactive students from Sheffield Hallam, Dundee, Cardiff, Bournemouth and beyond. With the support of the experienced team at Furlonteer, we developed the website, liaised with charities and built traction through the press and social media. A few weeks later, Studenteer was born: a platform run by students, for students.

What have you learned throughout this experience?

Of all the things I’ve learned throughout lockdown, resilience is by far the most prominent. The ability to bounce back from hard times and try again is difficult for everyone, but you can’t give up. I’ve applied and been rejected from countless graduate job roles. If I’d let that dishearten me, I would’ve never helped launch Studenteer!

What’s more, I’ve often (silently) questioned whether I’m capable of leading Studenteer. What makes me qualified? Truthfully, I’m not. But that’s why I’m not doing it alone. There’s a network of 60 people who’ve helped grow Studenteer in some way and I’m learning so much from each of them. I’ve sought out mentors and absorbed their knowledge, constantly asking for feedback and advice.

I’ve also realised the importance of networking. In the first instance, I wouldn’t have met the Furlonteer team without connecting via LinkedIn and speaking with people I’d never met. Also, through networking, I was eventually put forward for (and accepted) a graduate job.

Do you have any advice for students on how they can be proactive during this time?

Everyone has their own, unique skills and is at a different stage in figuring out what they are, developing them or putting them to use. Regardless of where you’re at, you can always create opportunities for yourself. Don’t be scared to leave your comfort zone! Whether that’s signing up for Studenteer or an online course (Google Digital Garage have lots for free), starting a blog or vlog, or simply asking the careers centre for advice like I did. For all you know, that conversation might open up an opportunity you’d never thought was possible.